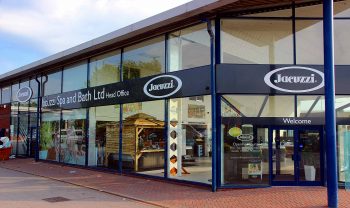 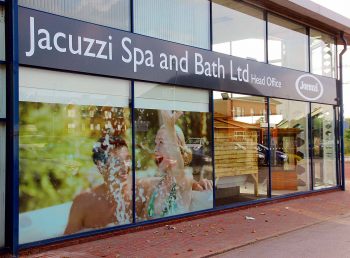 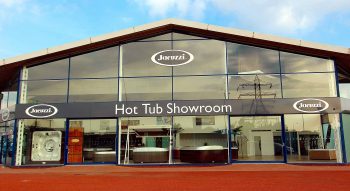 It’s not often we get the opportunity to work with such a prestigious brand, but when Jacuzzi moved into a large car showroom in South Leeds, it was a match made in heaven for us.

The first issue was to remove and replace the branded wraparound fascia sign that dominated the building, so a 200ft. long anthracite dibond sign tray was created, with the Jacuzzi branding applied in white vinyl graphics. With the building being almost totally constructed from glass, several issues were quickly identified. Firstly, in summer the heat from the windows regularly reached 80-90 degrees, being uncomfortable for both staff and customers. Large etched glass panels were applied to the inside of the windows, blocking the sun’s rays, and also giving privacy to lucky clients testing out the hot-tubs.

Another problem was the lack of product advertising space, as the new showroom was set back from the busy main road. Again the large glazed areas were utilised by applying 3 meter digital prints highlighting the Jacuzzi range.

Large monolith totems were also re-branded, saving the client thousands of pounds with replacements. A relatively large project completed speedily, and in a very cost-effective way.